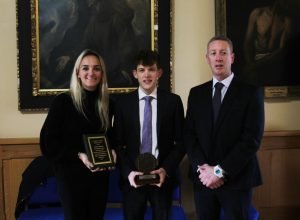 This is an award given to three students who achieve the most meritorious results in Leaving Certificate Mathematics nationally. It was established in 2011 by the Irish Mathematics Teachers’ Association (IMTA) and was sponsored by Accenture Ireland from 2011 to 2016. The award is now solely the remit of the IMTA. This award is part of our role of promoting mathematics nationwide. It aims to recognise excellence in mathematics at Leaving Certificate level. The recipients are chosen by the State Examinations Commission.

The Award consists of

2011: Alan O’Regan, Christian Brothers’ College in Cork. (1st ever recipient of the award)

We are offering additional supports over the next three weeks.

Online versions for both @GoogleForEdu and @MS_eduIRL platforms of IMTA Junior Maths Competition quizzes are now available on national website - work in progress- keep checking back for updates. Great resource for remote teaching.

Calling all google classroom experts- @tes would like to put a helpful list together of the best tips for teaching using that platform.

What would be your top tip for using google classroom?